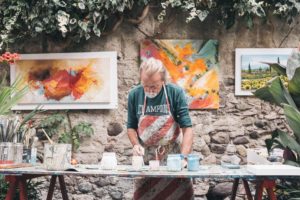 Wayne Imber is a retired professor who taught Social Psychology and Developmental Psychology to undergraduate and graduate students. For the past 30 years, his life revolved around teaching, and he loved every minute of it! In his spare time, he played golf as he found the sport very relaxing. Now that he has more time on his hands, he has been keeping busy in the kitchen; whipping up his favorite dishes, trying out new recipes, and lately, coming up with his own. He finds cooking relaxing and enjoyable too, and now that his time is his own, he spends more days in the kitchen than out on the greens. Here’s a secret dream he wishes to share with everyone: he hopes to publish an English cook book someday.

Wayne, or rather, Dr. Wayne Imber, has a PhD in Psychology and as mentioned above, taught Social Psychology and Developmental Psychology to undergraduate and graduate students. His years as a professor were spent at universities in Arizona, Chicago, and Massachusetts.

For him, learning is a lifelong pursuit, and he is humble enough to say that he learned from his students as much as they learned from him—maybe more. And he has kept all the lessons he has learned, from his years completing his bachelor’s and master’s degrees to the years he spent finishing his doctorate at university, and later, his years as a professor of psychology. He believes that these lessons, when used as guiding principles, can help everyone overcome life’s obstacles much more successfully—and with as much ease as possible.

To read more about his teaching experience, please visit the Teaching page on this site.

Helping others has always been important to him, and perhaps this the reason why Dr. Wayne Imber became interested in psychology. He wanted to acquire and develop the proper skills and knowledge needed to help people. His desire to help started early on in life and one of the most notable contributions to society that he has ever made happened way back in college. While he was still at university for his bachelor’s degree in Psychology, he helped rehabilitate individuals who have been released from prison. To date, he considers his time with them as one of the most fulfilling experiences he’s ever had.

Wayne Imber currently lives in Cincinnati, Ohio. He feels fortunate to have been given the opportunities that he’s enjoyed, both in his professional and personal life. If one were to ask him to describe his life in just one word, his answer would be, “fulfilling.”

There is much that Wayne Imber wishes to share with his readers. He’s particularly keen on sharing the lessons he’s learned in life in hope that these can help others as much as they helped him. To get started, he encourages you to visit his Blog page.

He invites you to bookmark this page so you can easily access his latest posts, and stay up-to-date with the latest conversations and discussions going on here. Check back again soon to read his latest updates!